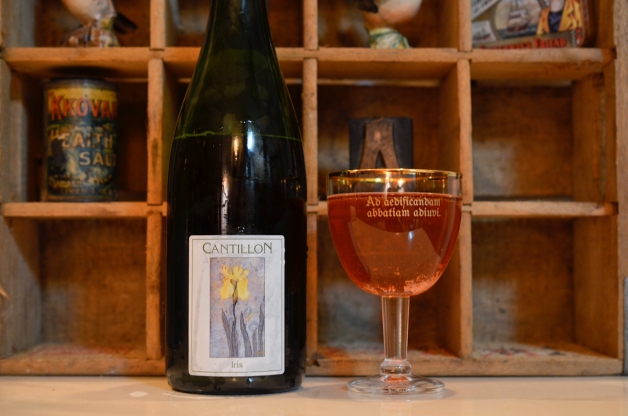 Iris is a unique beer for Cantillon, because it uses 100% barley malt.  Cantillon’s lambics, and lambics in general, are made up of a mixture of barley malt and wheat.  Another unique feature of Iris is the use of fresh dried hops for dry-hopping the beer.  Lambics use hops for their more ancient use in beer – their antibacterial quality.  Modern processes negate this need but lambics, being fermented openly with airborne yeasts in a largely uncontrolled manner, still benefit greatly from a healthy dose of hops to help prevent spoilage.  Older hops are used as they allow a higher quantity to be used without overdoing the flavour.  Iris, however is dry hopped (happens towards the end of the brewing process) with fresh hops for a more pronounced bitterness.  Iris does have many of the classic Cantillon features though: it is spontaneously fermented, bottle conditioned, and oak aged for two years.

A:  Iris appears a reddish gold, or an orange amber.  The head is small but fizzley, and crackles and pops its way into disappearance within a few seconds.

S: There is tart apple, plenty of funkiness and sourness, and lemon citrus.

T: Funky, sort of musty malt character, pretty light on the malts and with a citrus (lemon, and orange) hop kick that offers up some bitterness that really works in conjunction with the oak flavours imparted in the beer.  Finishes dry with an apple cider vinegar quality.

M: Gentle, fine carbonation and a light and crisp feel.

O: It is an interesting and very enjoyable beer, both unique and familiar at the same time. 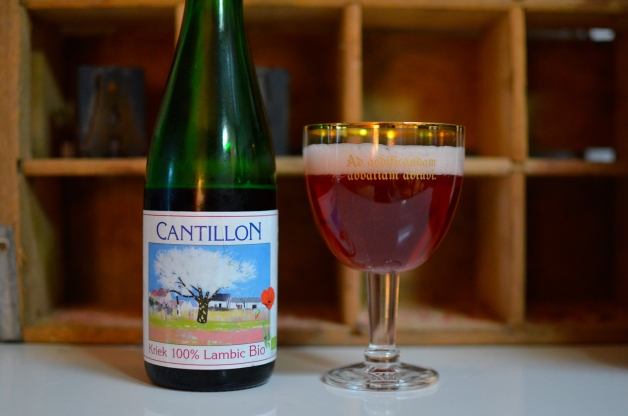 Today, the 14th of September 2013, has been badged ‘Sour Beer Day’, likely to coincide with Cantillon’s annual Zwanze Day.  On Zwanze Day, very limited edition Cantillon bottlings are tapped at select pubs worldwide.  In honour of Zwanze Day, I have cracked a bottle of Cantillon Kriek that I had in the cellar.  Unfortunately, I lacked the commitment to purchase tickets to Vancouver’s first Zwanze Day happening at The Alibi Room.

Kriek is a fairly popular style of fruit lambic made with sour cherries.  Most breweries who specialize in lambics also do a kriek of their own, Cantillon is simply one of the most well respected.  In my experience, they tend to be sweeter than they are sour, fizzy carbonation, almost like a cherry soda.  I had not previously had Cantillon’s version, though.  This particular bottle was bottled in December, 2011 putting it at nearly 2 years cellared.

Cantillon’s kriek pours a deep red with white head that appears pink due to the liquid below.  It is a darker hue than the Rose from my memory.  The smell is quite tart and acidic with a sweetness that comes across as something like a cherry-infused vinegar.  Taking a sip results in a puckeringly sweet-sour start, like sour candy.  This initial hit eases into a smooth, almost creamy gentle cherry flavour, still sour but more balanced.  The finish is dry, though not as dry as most Cantillon offerings.  This is the most sour Cantillon I’ve had to date, and for me that is a great thing.  I would imagine that those who are seeking a more neutral, balanced kriek may find this too sour for their tastes though. 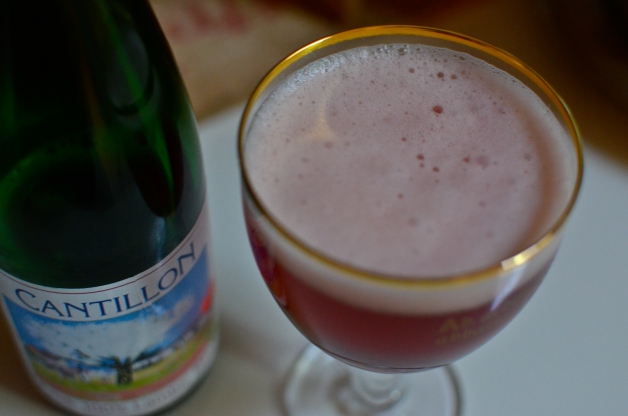 I have been (im)patiently waiting to open one of the several Cantillon bottles I was able to procure last month, feeling I really ought to get through the beers that are better fresher, such as the pile of IPAs I had somehow amassed.  I know it’s foreign to most people to have supply exceed demand on a regular basis when it comes to their beer collection, but it happens to me all the time.  But finally the fridge is rid of beers I really wanted to drink fresh, so I decided it’s time to crack open a Cantillon – and naturally, I chose the first one to open based on which I felt would be the best to enjoy fresh.

The Rosé is a 2 year old lambic that has had raspberries added near the end of its production.  This particular bottle was filled February 18th of this year, making it approximately 6 months old.  Being a lambic, this beer would age very well but it would be expected that the raspberry taste would mellow over time.  This can be a good thing, but being my only bottle of the stuff I wanted to experience the freshest raspberry taste I could.  I just noticed on the bottle it is best to be enjoyed within a year of bottling, or within 10 years of bottling is okay too.  So there you have it. 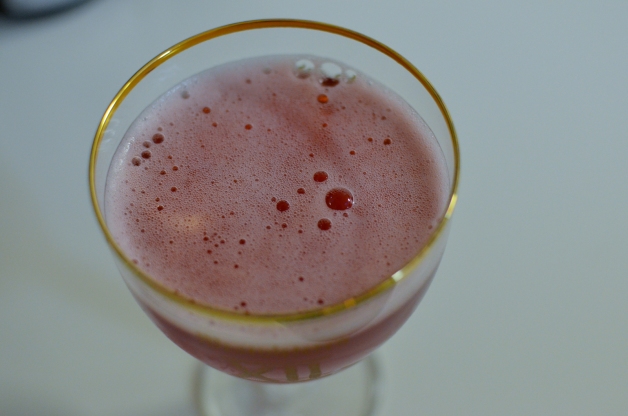 This beer pours an intense pinkish red with light pink head – about what you’d expect given the style and name.  The smell is classic gueuze / lambic – tart fruitiness, some subtle flower plant, and wine-like vinegar / grape notes.  The raspberry influence is subtle in the nose.  Taking a sip, the raspberry continues to be more subtle than I expected – it’s definitely present but its sweetness is gentle and extremely balanced.  The sourness is also fairly reserved and does not cause any puckering (this is both disappointing and highly enjoyable at the same time for me).  The quality of the lambic base is expectional and is what I’ve come to expect and love from Cantillon.  Its sweetness, sourness, acidity, and all its other attributes for that matter are gentle, but this doesn’t mean by any stretch that this is a boring or simple beer.  It finishes semi-sweet and a little dry, with a touch of age in the taste – but in a very pleasant way.  There isn’t any detectable “barnyard funk” according to my palate in the taste although there is a little in the nose; instead I think the yeast strings just add to the wood notes and wine-like quality.

I was expecting this to be one of the less exceptional Cantillons but it’s a home-run for me.  Awesome balance and great drinkability while retaining a full body and very interesting flavour.  Great carbonation too – this is one of my favourite features of a good example of this style – it has a fizzy, medium carbonation that dances on your tongue. 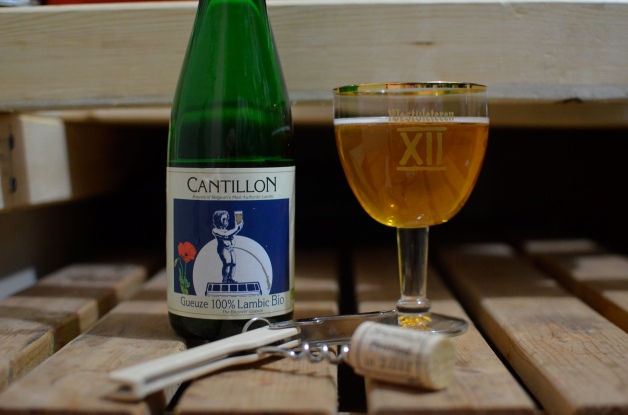 Cantillon is a name with some clout in the Lambic arena, boasting perfect or near-perfect scores on beer sites (for this particular gueuze, 99 at Ratebeer, 94 at Beeradvocate).  Upon looking up those scores, I also noticed a significant number of mediocre reviews, calling the beer overpriced and overhyped (reviews I did not read before shelling out over $8 for a 37.5cl bottle).

Anyway, I owned it already and after a 25km bike ride, I was feeling that this would be a refreshing choice for the evening and a beer well worth documenting.  The bottle is corked then capped, and this particular bottle was filled a little over 18 months ago.

Popping the cork, the smell of apples, slight citrus perhaps, and what to me seems like apricots or peaches, orange fruit.   And, of course, that familiar brett smell.  ’Skunky’, the girlfriend referred to it – but even she didn’t mean it in a negative way (and was quick to take a taste).

The beer pours a bright gold colour, and the first 10cl glass came out crystal clear – the second glass had a slight haze.  The off-white head is fizzy and dissipates within 15-20 seconds… hence getting a good photo of it proved difficult.  Upon sipping, the fizziness dances on your tongue along with some sour apple and mellow, sweet citrus.  The funk approaches after a moment and sticks around through the finish.

This is a refreshing and interesting beer with a nice modest amount of funk, but at the price paid it would not be something I’d stock up on.  I will probably add one or two to the cellar, though, to see how it ages.